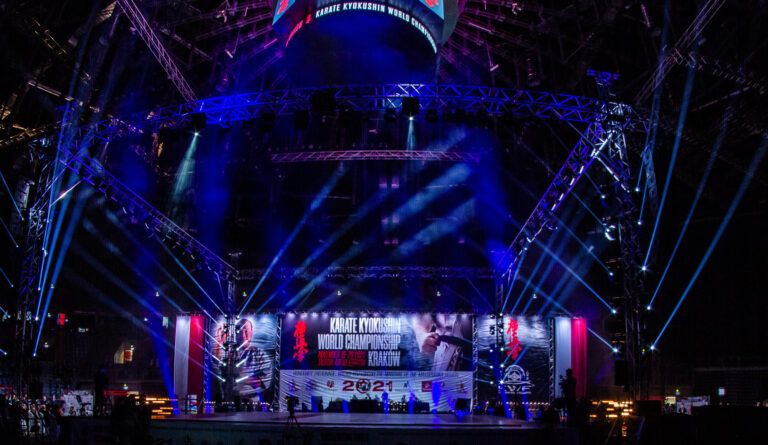 On November 19-2021, the World Kyokushin Karate Championships – Krakow 2021 were held at TAURON Arena Krakow. It is worth adding that this rank was held for the first time in the history of Karate Kyokushin in Poland and Europe.
According to the decision of the Polish Karate Association and the  Kyokushin World Federation, the organizer of the Karate Kyokushin World  Championships – Krakow 2021 was the Małopolska District Karate Association, headed by the president of MOZK – Shihan Robert Kopciowski (6th dan) and the secretary of MOZK – Sensei Arkadiusz Sukiennik (4th dan), who as the Organizing Director of the Championships was the main coordinator of both the preparations and the course of this unique and historic sports event. The honorary patronage over the championship was assumed by the Marshal of the Lesser Poland Voivodeship – Witold Kozłowski. The main partner of the championship was the Lesser Poland Voivodeship. The strategic sponsor of the championship was TAURON Polska Energia S.A. In addition, the organization of the championships was supported by partners and sponsors: the company JONIEC, the Municipality of Skawina, ARKA Kancelaria Księgowo-Podatkowa Janusz Zięcina, GSU S.A., Kwiatosfera. The organization of the championship, apart from spectacular karate shows and TAIKO drummers, was graced with their shows by the Border Guard Representative Orchestra from Nowy Sącz and the soldiers of the 21st Podhale Rifle Brigade from Rzeszów.
684 female and male competitors from 32 countries from Europe, Asia, Africa, North America and South America signed up for the sports competition. Unfortunately, due to the pandemic situation and the resulting restrictions, the representatives of Japan and Australia did not participate in the World Championships . The main judge of the championship was the President of the World Kyokushin Federation – Shihan Antonio Pinero (9th dan), and the technical judge was Shihan Fernando Perez (6th dan), who coordinated the work of 100 international judges qualified to judge this year’s World Championships. Apart from the aforementioned Shihan Antonio Pinero (9th dan) – KWF President, the presidential table of the championship was attended by such Kyokushin world celebrities as: Shihan Andrzej Drewniak – KWF General Secretary and PZK vice-president, Tomás López – KWF Treasurer, Shihan Sadok Kouka (7th dan) – President KWF Tunisia and African KWF Responsibile, Shihan David Pickthall (7th dan) – President of IFK and Shihan Aleksandr Pichkunov (5th dan) – Secretary General of the Kyokushin World Union. 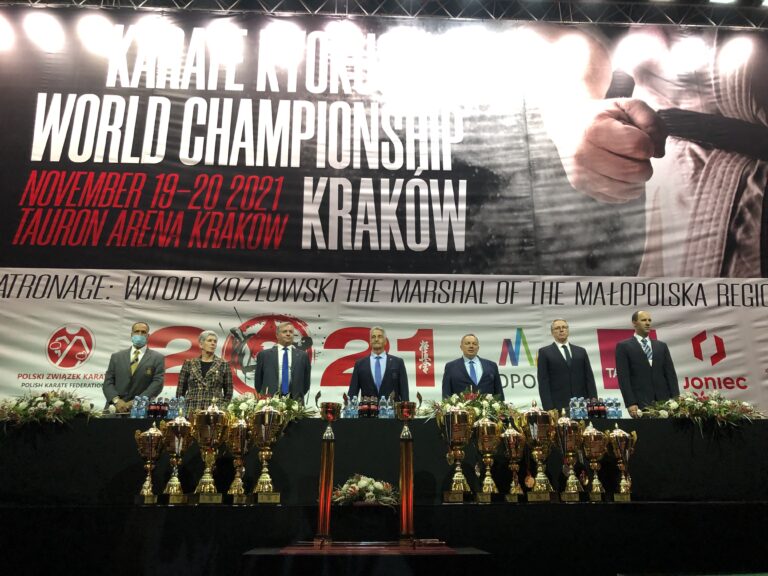 It should be emphasized that the championship was prepared in an exceptionally professional manner. On the first day of the championship, all competitions up to the age of 21 and kata as well as kumite eliminations for seniors and seniors were held. Thanks to the solutions applied, in particular IT and technical, including the sound system, it was possible to efficiently play the championship simultaneously on 7 mats. On the second day of the competition, according to the schedule of the organizer, the course of the championship was limited to the main mat, placed on a special landing (platform), surrounded by a ramp with a professional lighting and stage sound system installed. In this unique setting, with the use of special effects – light, sound and video on the main mat, not only the semi-final and final fights of seniors and seniors, but also spectacular karate and artistic shows were held.
The second day of the World Cup began with the official opening of the competition, during which, after a traditional Japanese ceremony, the Border Guard Representative Orchestra from Nowy Sącz played the Polish national anthem. Then, on behalf of the organizer of the championship – Małopolska Regional Karate Association, the players, spectators and guests gathered in the hall were officially welcomed by the president of MOZK – shihan Robert Kopciowski. Next, the following spoke: Shihan Antonio Pinero and Shihan Andrzej Drewniak and the chairman of the Education, Physical Culture, Sport and Tourism Committee – Mr. Rafał Kosowski, who on behalf of the Marshal of the Małopolska Voivodeship, Witold Kozłowski, officially opened the Karate Kyokushin World  Championships – Krakow 2021. At the end, the following spoke: PZK President – Maciej Sokołowski and President of the Polish Olympic Committee – Andrzej Kraśnicki. During the official opening ceremony, the President of MOZK – Shihan Robert Kopciowski and the Secretary of MOZK – Sensei Arkadiusz Sukiennik, as the organizers of the World Cup, thanked people who supported the idea and organization of the Kyokushin Karate World Championships – Krakow 2021 in the form of occasional tones. judges who worked during and for the championship.
In a special way, the organizers of the championship honored Shihan Antonio Pinero (9th dan) and Shihan Andrzej Drewniak (9th dan) by handing them replicas of Polish sabers – as a token of appreciation for their achievements for the development of world and Polish Karate Kyokushin. The Polish Karate Association in the person of President Maciej Sokołowski in gratitude for the organization of the World Championships honored with occasional congratulatory letters from the president of MOZK – Shihan Robert Kopciowski and the secretary of MOZK, Organizing Director of the World Karate Kyokushin Championships – Krakow 2021 Sensei Arkadiusz Sukiennik. A congratulatory letter from the President of PZK also received Shihna Andrzej Drewniak – General Secretary of KWF and vice-president of PZK. During the opening ceremony of the Kyokushin Karate World Championships in Krakow, Shihan Witold Stolarczyk and Shihan Andrzej Krawontka and Shihan Robert Kopciowski were honored with the promotion to the 6th dan level. A unique event during these championships was the awarding by the authorities of the Kyokushin World Federation of the honorary degree of 1st Dan (black belt) to Mr. Witold Kozłowski – Marshal of the Lesser Poland Voivodeship. Thus, Mr. Witold Kozłowski joined the elite group of “black belts”. 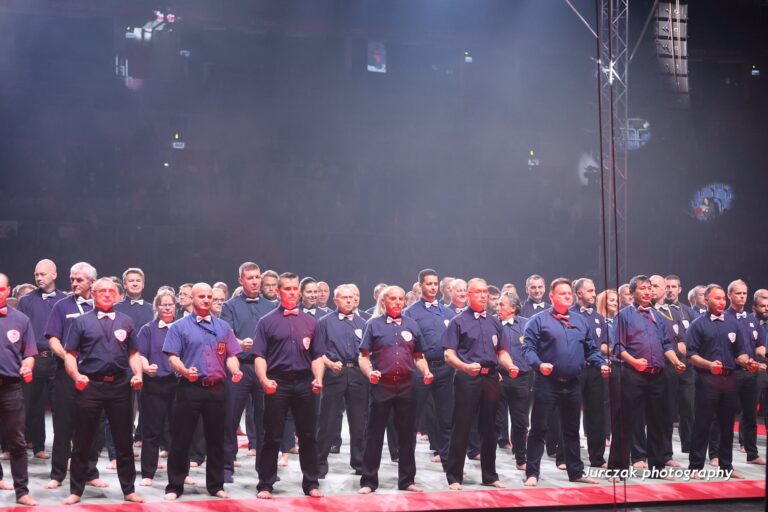 After the official opening ceremony of the championship, the competitors’ sports competition was preceded by shows performed by this year’s World Championships gold medalists in the kata competition – Sempai Anna Lisowska from Poland and Sempai Jon Lamas from Spain. Then the executioner show from tameshiwari by Shihan Jesus Talan from Spain. Just before the start of the sports competition, a demonstration of permitted and prohibited techniques in Kyokushin Karate sports fights was presented to the audience by Sensei Krzysztof Kopciowski (3rd dan) and Sempai Konrad Kopciowski (2nd dan) from Wielicki KKK. The artistic program of the championship was honored by TAIKO drummers with their four ten-minute performances on the main tatami. In addition, the sounds of TAIKO “led” to the tatami fight of the semi-finalists and finalists of the World Championships of individual weight categories. During the championships, Michalina Drewniak presented her vocal performance. The demonstration of 50 soldiers of the 21st Podhale Rifle Brigade from Rzeszów was extremely popular, during which they presented the practical application of karate techniques, spectacular scenes from the battlefield, assault with the use of combat vehicles and firearms. Before the final fights there was a show performed by children from Wieliczka and Limanowa. The children’s show included a short presentation of general physical fitness, basic techniques (kihon), a self-defense scene and tameshiwari, including “mae tobi geri” kicks. Then the presentation of the author’s kata, finished with tameshiwari was performed by the YMCA Kraków player – sempai Anna Lisowska (2nd dan), gold medalist of the Kyokushin Karate World Championships – Kraków 2021. The representatives of the Wieliczka Kyokushin Karate Club and ARS Kyokushinkai Club in Limanowa followed. Karatekas from Wieliczka under the direction of Sensei Krzysztof Kopciowski (3rd dan) presented a spectacular fight scene – self-defense with the use of weapons (stick, knife) and breaking hard objects using “tobi geri” techniques. Then using the manual seiken technique 4 boards were defeated by the national team doctor,  Sempai Krzysztof Mawlichanów (2nd dan). The championships from Limanów under the direction of Arkadiusz Sukiennik’s Sensei (4th dan) also graced the championship in a spectacular way. The Limanovians presented scenes with the practical application of karate and self-defense techniques, finished with tameshiwari. Sensei Arkadiusz Sukiennik at the end
(4th dan), Sempai Przemysław Juszczak (1st dan) and Karol Sułkowski (2nd kyu) performed a tameshiwari show, during which Przemysław Juszczak and Karol Sułkowski smashed 10 ytong blocks using the shuto technique, and Sensei Arkadiusz Sukiennik broke 4 with low-kick kicks. baseball bats and smashed 5 ice lumps by hand shuto technique.
As for the sports competition during the World Championships, it – like their organizational level – stood at the highest world level. As mentioned earlier, 684 female and male competitors from 32 countries – Europe, Asia, Africa, North America and South America – entered the sports competition. The sports competition took place in various age and weight categories. A total of 46 sets of exceptional and unique medals, cups and diplomas were distributed. In addition to the opinion of professionals and participants, the best confirmation of the organizational and sports level, but also the popularity of Karate Kyokushin in Poland, is the fact that the stands at TAURON Arena Kraków, in the assumed number – up to 1000 spectators, resulting from the sanitary restrictions in force, were fully filled. The above is also confirmed by the number of viewers who watched the broadcast of the World Cup live via a dedicated YouTube channel, which was close to 80,000. It should be emphasized that the championship was also broadcast via other social media and probably had its audience there as well.
To sum up, the  Karate Kyokushin World Championships – Krakow 2021 can be considered a sports and organizational success and an excellent way of promotion.
Final report
Transmision live :link 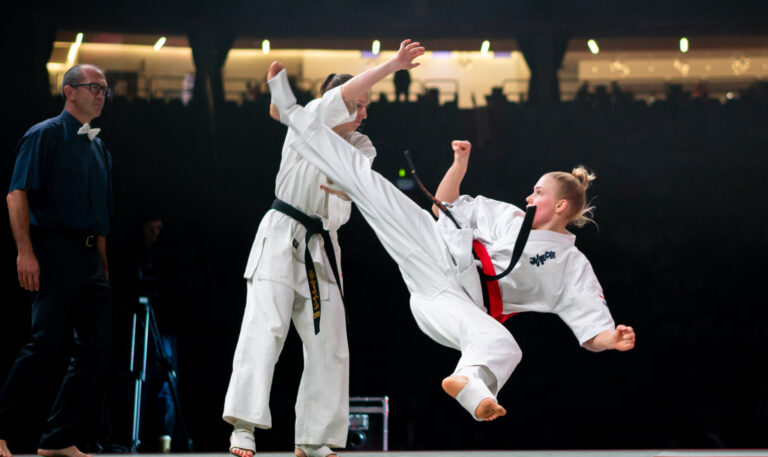 Gallery and movies below: