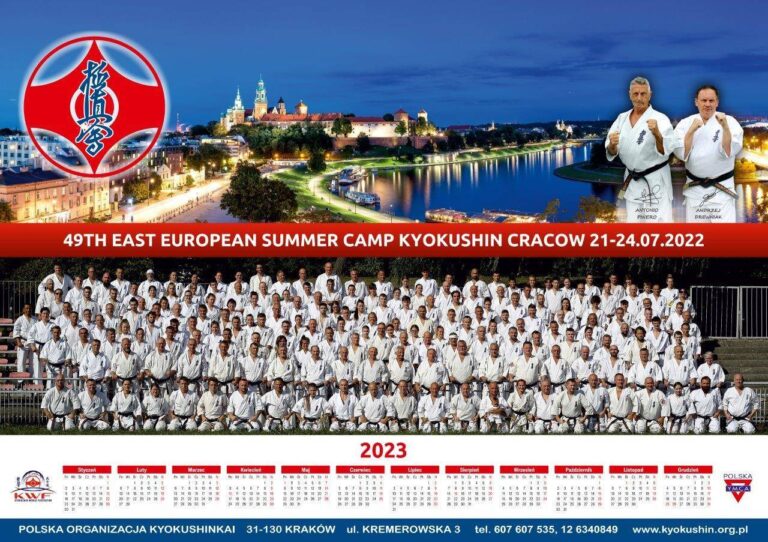 On July 21 – 24, 2022, the 49th Eastern European Kyokushin Summer Camp was held at the facilities of the Academy of Physical Education in Krakow with the participation of nearly 200 participants from 5 countries, including Germany, Moldova, Japan, Israel and the Czech Republic. The main coach was the President of KWF Antonio Pinero 9 dan and 3 trainings were led by World Championship medalists sensei Michał Werner and Kamil Mastaj. The program was supervised by the general secretary of KWF Andrzej Drewniak. The program of the day included a morning warm-up and 3 two-hour workouts. The medical support was provided by the Krzysztof Mawlichanów, MD, PhD.
On Friday evening, a meeting of the Polish Kyokushinkai Organization was held at the Justyna Hotel with the participation of 54 managers of centers and shihan A. Pinero, shihan A. Drewniak and the President of PZK Maciej Sokołowski. The participants discussed the most important problems of Kyokushin and PZK as well as the situation in world karate. On Saturday afternoon there were exams for dan and kyu with the participation of shihan present at the camp. In the evening there was the customary Sayonara combined with a cabaret competition. This year, the combined group 1,2,3 led by shihan Andrzej Krawontka (aka Baca) won the first place.
On Sunday morning there was over an hour long kumite exam for dan and kyu. This was followed by a photo session and the handing over of nearly forty certificates for data. The organizer of the annual East European kyokushin summer camp is the Polish Kyokushinkai Organization headed by shihan Andrzej Drewniak. Another jubilee 50th East European camp is planned for July 2023.