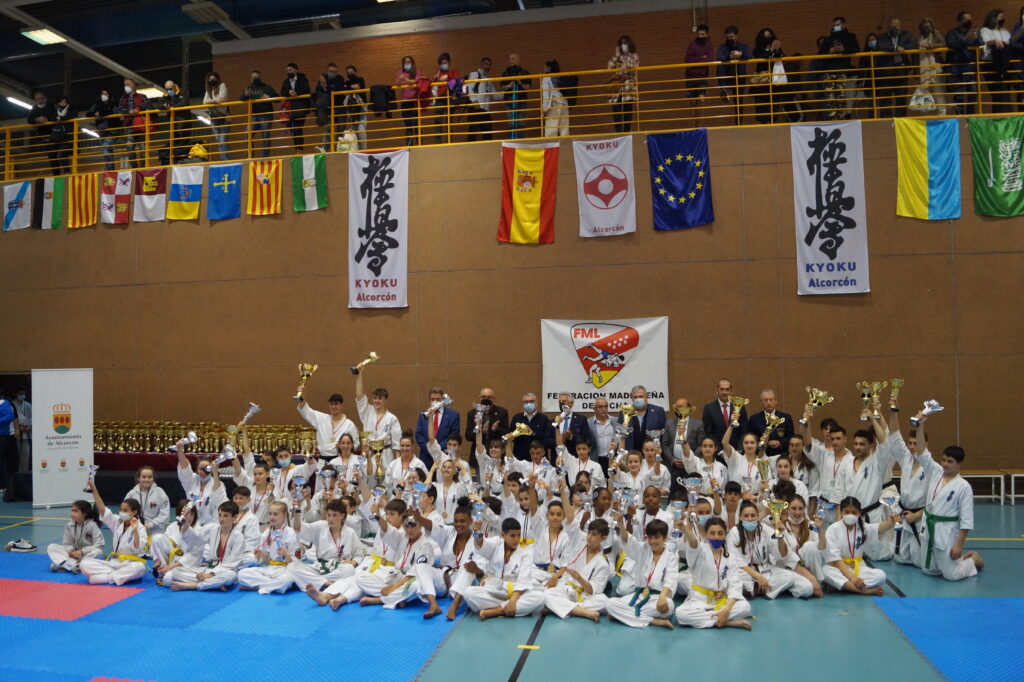 Last Saturday, April 9, 2022, the 41st Spanish National Kyokushin Championship was held in the City of ALCORCÓN – Madrid – SPAIN, with a large participation: 52 CLUBS, mainly from KWF Spain, and KWF Guest Countries such as Saudi Arabia, Costa Rica, Norway, Brazil, Portugal, Holland, France (Reunion Island – Indian Ocean), as well as other Clubs from Guest Kyokushin Organization such as Kyokushin-Kan, IFK, and others.

The Championship was led and coordinated by SHIHAN ANTONIO PIÑERO, President KWF, without a doubt a great honour for the success of the Championship.

We also had the presence of other VIPs, such as:

With incredible numbers: 6 Tatamis that streamlined the competition for 400 Competitors, 70 Referees, 100 Coaches, 50 members from the Alcorcón Martial Arts Club Organization Team, and an audience that exceeded 1000 people, in short, a great staging for a great Kyokushin event. Thus, in the MORNING Session, from 09:00 hours, the development took place, only for KWF Clubs, in KATA Categories for all Ages (Alevin, Infantile, Juvenil, Junior and Senior) and Kumite Categories Alevin (10-11 years) and Infantile Kumite (12-13 years). At the end of the delivery of Trophies this morning, a Presentation Ceremony was held with the participation of all the Competitors from both the Morning and Afternoon Sessions, plus the entire refereeing and organization team, and the cooperation for this Ceremony of Presentation with about 100 children from the Alcorcón Martial Arts Club, of course, the presence of the Authorities mentioned above, which enhanced a Ceremony that counted a number of participants, approximately 700 people in the Arena, with the delivery of Presents for the Participating Clubs, Referees and VIPs After a logical and deserved “Break Time”, the AFTERNOON Session began at 4:00 p.m., in which Clubs from other Kyokushin Organizations were invited, for the Youth Categories (14 – 15 years), Junior (16 – 17 years old), Under 21 (18-19-20) and finally Senior (+ 21 years old). Thus, with the subsequent elimination rounds, Semi-finals and Finals, the Trophies were delivered at 7:30 p.m., thus ending a great Kyokushin Day of our KYOKUSHIN WORLD FEDERATION ESPAÑA. As the organizer of the Event, I hope and wish that we have been able to give the level that a National Championship of this category deserves, which was celebrating its 41st edition.

Thanks for everything, and see you in future Events.