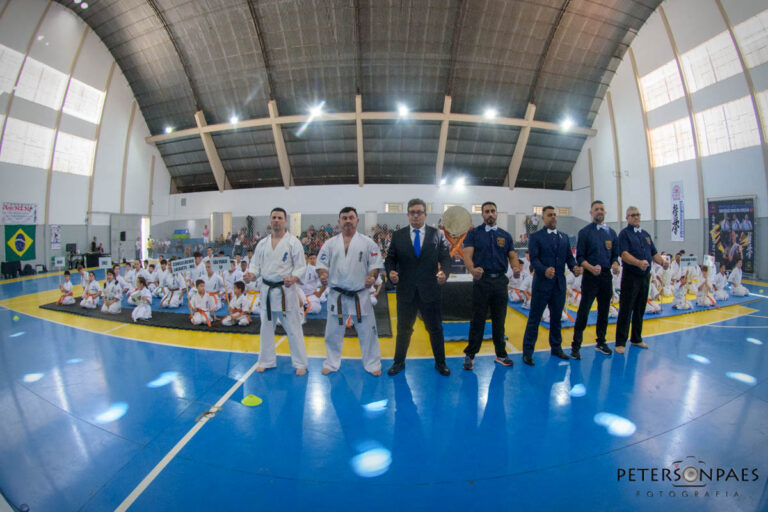 Previous
Next
On August 27, 2022, the 1st Brazilian KWF kyokushin championship was held in Tatui – São Paulo, in the city sports pavilion. It should be noted that this is the 1st KWF championship in Brazil. Fulfilling the decision of the KWF-Brasil table in which this 1st Brazilian championship would be one only for KWF members, it was up to the Kyokushin KWF Paulista Federation to organize the Championship, with the support of Ronin Academy and sensei Daniel Martino as President of the São Paulo federation. and organizer of the Championship. With some sponsorship from local businesses, Kyzami Martial Arts and Academia Ronin, it is important to emphasize here the support of the Tatui City Hall, namely the mayor and his councilor present at the event. The championship had 150 female and male competitors from various dojos in Brazil. We were also honored to receive the representatives KWF – Chile, sensei Felix Gonzalez and sempai Pablo Schiavina representative KWF – Argentina. The main judge of the championship was the President of KWF Brazil, the shihan António Pereira, KWF representative in Brazil and South America, also coordinating the work of the judges. The presidential table was attended by state representatives Sensei Daniel Martino – São Paulo, host, Ricke Geison – Minas Gerais, Jeferson Martins – Santa Catarina, Shihan Antonio Pereira representing the state of Ceara, the Hon. Alderman of the sport of the city of Tatui, representative of Kyzami and the presenter of the event. The morning began with a meeting of the panel of referees to harmonize criteria. The official opening ceremony of the championship followed. And after the speeches of the official entities, we continued the ceremony with Taiko, Dojo Kun, Referee’s Oath, Athlete’s Oath and we ended the ceremony with a series of Tsukis that was very much appreciated by the spectators. At the end of the ceremony, the traditional salvation took place at the presidential table of all athletes and referees. It should be noted that the championship was prepared in an exceptional way. The kumite and kata categories for children up to 14 and 15 years old were completed in the morning. After the break the competition continues with kumite, junior kata and male and female senior qualifiers. With the last four qualified in Senior and Veteran +38 kumite, the spectacular Tameshiwari race took place. The competition had an excellent technical level, with some spectacular Ippons. Highlight notes: Lucas Cavalheiro from Ronin academy, Tatui makes a dream championship. Wins in Kumite Open, Senior kata and Tameshiwari. Victor Lopes gets the most spectacular ippon of the championship with Tobi ushiro mawashi geri. Completely erasing your opponent. And the 48-year-old FeliX sensei wins in the +38 category. On the 28th in the morning we had an international seminar focused on the Syllabus KWF. In recent years we have seen the integration of several sempais and sensei from other organizations in Kyokushin. This transitional phase needs a lot of dedication and rigor so that we can all have the same technical line. During the afternoon we proceeded to tests for black belt and Dan equivalences. It is worth mentioning the support of sensei Felix Gonzalez throughout the championship, seminar and tests. The excellent proof of sensei Martino brilliantly finishing the fifty fights of rigorously 1 minute each with some ippons. Excellent technical and mental level also evidenced by sempai Pablo Schiavina and thirty fights finished with a lot of soul and heart. After the ceremony for the delivery of belts and certificates, we ended this extraordinary and historic weekend at KWF-Brasil. Energies now focused for the 1st South American Kyokushin KWF Championship in Chile on February 11, 2023. With the 3 representatives of KWF South America we can say without any room for error that our organization is in good hands. KWF-Brazil.

Gallery from seminar and exam :